The Toronto debut of New York City ‘disco orchestra’ Escort has been a long time coming. After forming the group in 2007, Dan Balis and Eugene Cho released a string of 12-inch singles that won praise for their meticulous, sample-free take on the disco era’s most ostentatiously orchestrated epics.
They spent the ensuing three years completing their self-titled debut but in the meantime their 17-piece ensemble fronted by Paris-born singer Adeline Michèle earned a rep as one of the city’s pre-eminent live dance acts.
In concert, there’s a risk instrumental disco can come off as bland session music but the five-piece touring version of Escort was impressively tight, filling their insistent rhythms, addictive basslines and conga percussion with an exhilarating energy that easily spread through crowd, which seemed to range in age from 21 to 65.
It’s also a testament to Escort’s contemporary appeal that songs like Cocaine Blues, Camèleon Chamelon and the breathless All Through The Night were as ecstatically received as ESG’s punk-funk jam Dance, Machine’s underground classic There But For The Grace Of God Go I and a rousing version of Storm Queen’s 2010 cult club single Look Right Through that had the heads in the front belting out every word.

My recipe in Elle Magazine

When Elle Magazine asks me for a recipe, of course I call My Maman! Merci Maman je t'aime! 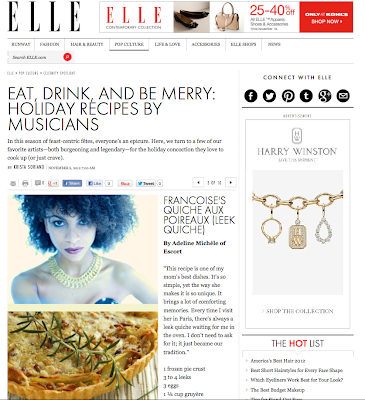