I have been following the Olympics games this year. London 2012 has been incredibly intense so far.
Watching these athletes give their best to be the best at what they do is so inspiring and makes me want to work harder.
These men and women belong to the category of the extraordinary, just like the musicians and performers that we admire so much.
But as I watch the Olympics, I realize that there is a huge difference between art and sports: being the best.
When an athlete in any sport, competes for a title the only way to win is to be number one on that specific day, at that particular moment.
No one can discuss, judge or revoke who wins a race or a match, or who jumps higher or lifts the heaviest weight.
But when a singer or rapper wins a Grammy award, what did he exactly win? Who can tell he is the best? What makes him the best?
And the real question is: Does winning a Grammy award mean you are the best???
From what I understand, it isn't based on record sales, or the highest or longest note, or even based on the public's vote. It isn't based on the hours of work put into the album either. So what is it really based on?
Adele won six Grammy awards this year but you can find some people who don't like her voice, or don't like her music, or don't think she is the best in her category.
But when Husain Bolt comes first at the 100m final. There is no discussion possible. He IS the best.
Now, I am not writing this to diminish the value and meaning of the Grammys, or any other award ceremony. I am simply realizing that the "extraordinary" category isn't measured by the same standards in sports and in arts. Musicians and singers are equally "extraordinary" to me as athletes.
I am mostly writing this to be aware that it is not because you didn't win Grammys that you are a bad singer, and it isn't because you won a Grammy that you are the best singer.
As a musician I am so inspired by those champions and medalists. They make me want to work harder. They make me realize that in order to be the best, there is no other way than putting the time, the hours and the practice. In every single interview, I hear the same thing over and over "I worked so hard".
(something that you don't necessarily hear at every single Grammy acceptance speech)
And now that you know that there is no real way of measuring how good you are as a musician, all you can do is do your best to be the best that you can be, according to your own standards. And if you don't win a Grammy award, you'll know that you've "worked so hard".

The conclusion is that there is no comparison between artists and athletes. Athletes are judged by performance and artists are judged by taste.
The one thing we have in common is PASSION.

Thank you for your time.
You can here my music at www.weareescort.com and if it sounds good to you, you can "like" me on Facebook at: http://www.facebook.com/pages/Adeline/120260951401492?ref=hl
You may not think I'm the best, but I can promise you that I have passion.

In the meantime, enjoy the Olympics and let's put our hands up for these extraordinary human beings! 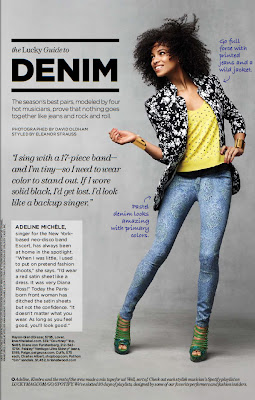